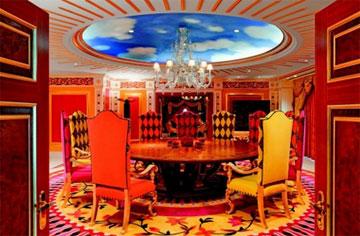 Jumeirah Group’s impressive suites at Burj Al Arab, Pera Palace Hotel Jumeirah and Jumeirah Messilah Beach Hotel & Spa have all been featured in Elite Travelerâs âTop 101 Hotel Suites in the Worldâ. As the annual selection made by the editors of Elite Traveler and a panel of celebrity readers, the list provides a literal private jet flight plan to the worldâs most spectacular accommodation. The US-based private jet magazine uses the awards to highlight the yearâs most exciting designs, services, and amenities â all in amazing locations around the world. At the Pera Palace Hotel Jumeirah in Istanbul, the Emperor Franz Joseph Suite has been recognised for its âmajestic colour combo and princely Euro vibeâ. The presidential suite, which is available for $3,873 a night and boasts unobstructed views of the cityâs Golden Horn, is named after the Austro-Hungarian emperor who stayed at Pera Palace. Completed in May 2013, Jumeirah Messilah Beach in Kuwait is one of Jumeirahâs newest openings. The Royal Suite, available from $6,000 per night, is praised by Elite Traveler for âtaking your privacy seriously with its own hallway and elevator, as well as discreet personal butler serviceâ. Ornate details, such as hand-painted cushions and curtains, lend a regal atmosphere to a space that includes three bedrooms, a Kuwaiti-style meeting room and a master bathroom with a large Jacuzzi and jetted shower. Spread over two floors and measuring 780 square metres, the stately and opulent Royal Suite at Burj Al Arab in Dubai has lavishly appointed interiors, a majestic colour scheme and sumptuous furnishings. Elite Traveler notes that âno detail has been overlooked in this exuberant Arabian palace, where the four-poster canopy bed rotates, the marble spa tub sports Swarovski faucets and the iPads are made of 24K goldâ. Piers Schreiber, Vice President of Corporate Communications for Jumeirah Group, commented, âWe are delighted to have three of our magnificent hotels honoured in Elite Travelerâs list of âTop 101 Suites in the Worldâ for 2013. This recognition is testament to the talented teams at each of the hotels, who ensure that every detail of a stay delivers an imaginative and exhilarating experience to match the splendour of the location and the design of the suites.â Jumeirah Group, the global luxury hotel company and a member of Dubai Holding, operates a world-class portfolio of hotels and resorts. Jumeirah Hotels & Resorts includes Jumeirah at Etihad Towers in Abu Dhabi; Burj Al Arab Jumeirah, Jumeirah Beach Hotel, Jumeirah Creekside Hotel, Jumeirah Emirates Towers, Jumeirah Zabeel Saray and Madinat Jumeirah in Dubai; Jumeirah Messilah Beach Hotel & Spa in Kuwait; Jumeirah Bilgah Beach Hotel in Baku; Jumeirah Dhevanafushi and Jumeirah Vittaveli in the Maldives; Jumeirah Himalayas Hotel in Shanghai; Jumeirah Frankfurt in Germany; Jumeirah Grand Hotel via Veneto in Rome; Jumeirah Port Soller Hotel & Spa in Mallorca, Spain; Pera Palace Hotel Jumeirah in Istanbul; as well as Jumeirah Carlton Tower and Jumeirah Lowndes Hotel in London. Jumeirah Group also runs the luxury serviced residences brand Jumeirah Living; the wellness brand Talise; Jumeirah Restaurants; Wild Wadi Waterpark; The Emirates Academy of Hospitality Management; and Sirius, its global loyalty programme.