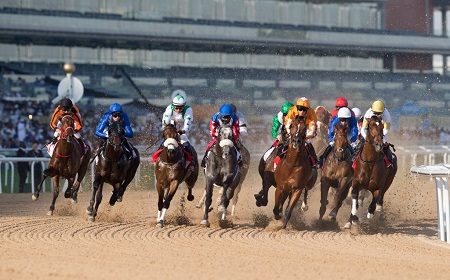 Dubai is fast increasing its sporting offering and one of the prime examples is with horse racing at the beautiful Meydan race track. The season is focussed around the Dubai World Cup carnival, which has again been announced for 2020. This will be taking place over 10 weeks, that includes racing over nine consecutive Thursday evenings between January 2nd and February 27th. This will then culminate with Super Saturday, which will take place on the 7th of March.

The prize money across these 10 fixtures is $12,740,000 and is going to attract horses from around the world, that includes the likes of France, Australia, South Korea, USA and the UK. Following this, the track will then host the 25th edition of the Dubai World Cup on the 28th of March.

This is again set to be the world’s richest meeting, that includes the $12 million Grade One Dubai World Cup. Punters have already started supporting the race using the no deposit 50 free spins thunderstruck offer that is available. The ante post favourite is McKinzie, who is coming off the back of landing the Breeders’ Cup Classic in impressive fashion. If he takes his chance, then he is going to take all the beating and is around 5/1 at present.

Also on the card will be the Group Two Dubai City of Gold, which has prize money of $350,000. This is an increase of $50,000 on previous years, with the race taking place on turf over 2410m. The addition to the prize money means the overall amount for Super Saturday has increased to $2.7 million. The form of Super Saturday is also worth following, as three of the nine winners were victories on World Cup night. One of these of course being Thunder Snow, however the horse has been retired so will not be returning this season. He is the only two time winner of the Dubai World Cup.

Overall the DWC carnival will be hosting two Group One’s, 10 Group Two’s and 10 listed races. It all sets up for a very exciting season ahead at the track as the programme now draws ever closer.