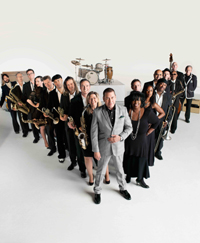 Keyboard King Jools Holland Is Set To Perform A Record-Breaking Concert At The 9th Skywards Dubai International Jazz Festival. The popular TV presenter, pianist and bandleader will perform live in front of the Skywards Dubai International Jazz Festival spectators on February 16th, 2011 at the Dubai Media City Outdoor Amphitheater, following the concert of the legendary Alison Moyet. Anthony Younes, founder and organizer of the festival, said "We are really pleased to have such popular and respected artists as Jools Holland and Alison Moyet headlining the opening night of the festival, the 2 shows will certainly appeal to large tasteful crowd, and I hope they can surprise the crowd with a special dual appearance, let’s wait and see! " Jools’ Holland and his Rhythm and Blues Orchestra will include Gilson Lavis, special guest vocalists Ruby Turner and Louise Marshall. The musical maestro sprang to fame in the 1970s aged 15 when he formed Squeeze with Glenn Tilbrook and Chris Difford. Their hits included Up The Junction and Cool For Cats. After co-presenting The Tube on TV with Paula Yates, Jools formed The Jools Holland Big Band in 1987 and this has gradually morphed into the current 20-piece band, with organist, drummer, three female vocals, guitar, bass guitar, two tenor saxophones, two alto saxophones, baritone saxophone, three trumpets, and four trombones. They play live in front of more than 500,000 people around the world annually. Jools’ career as a recording artist has also seen him collaborate with performers like Sting, Tom Jones, George Harrison, Eric Clapton, David Gilmour, Bono, Joe Strummer, KT Tunstall, Robert Plant, Smokey Robinson, Sugababes, Ringo Starr and Peter Gabriel. The Yazoo star, Alison Moyet will warm up the night with her performance prior to Jool’s show. The 80’s icon, Alison Moyet is a multi-award winner who is branded as one of pop’s greatest survivors, and who has helped put together the definitive anthology of her 25 years as a solo performer. Not only does she give us another chance to fall in love with her greatest hits, but also she brings back into the light some of the forgotten jewels of her glittering back catalogue. This night will kick off with a performance of the awarded star Mica Paris the power, and sheer soulfulness of her singing that made a major impact on the UK music scene. For full information on festival line-up, venues and program, please visit dubaijazzfest.com or call Chillout Productions on 04 3911196.