5 of the best places to visit in Dubai 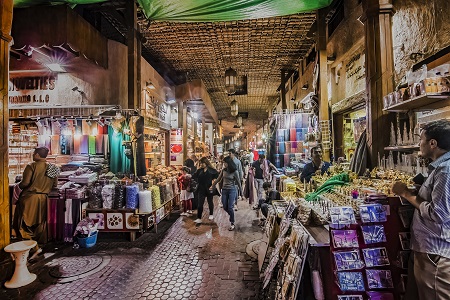 Over the years Dubai has emerged as one of the world’s leading tourist destinations. You can travel to Dubai through different حجز مصر للطيران flights. Having begun as a seaport, today Dubai has constructed and erected some of the world’s most impressively designed buildings, malls, and even the stunning man-made Palm Island. As each attraction grows in popularity so does the world’s curiosity, making this industry so lucrative that it has the ability to sustain both the emirate's large retail and hospitality industries. With an impressive number of destinations worth mentioning, I have put together just 5 that would not only be worth a read but also worth a visit. So without further ado, here they are!

An aerial view of the breath-taking man-made Palm Islands will reveal that this stunning construction was made to look like an encircled palm tree. Constructed in 2001 as one of a three-part idea, Palm Jumeirah, Deira Island, and Palm Jebel Ali; only Palm Jumeirah is found on the coast of Dubai. The tree-shaped island has within its trunk and branches lavish hotels and homes owned by the very elite of Dubai. The blue-green seashore between the palm trees spine, branches and the circle around the tree, adds to the sheer beauty of the island.

The world’s tallest building is found in Dubai – standing at a whopping 828.8 meters tall, this iconic skyscraper has more than 160 stories which is recorded as the highest number of stories in the world, making the elevator distance, the longest in the world. The inspiration behind this captivating building design came from the Hymenocallis flower which is a graceful and dainty plant indigenous to desert climates. This superstructure, boasts two observation decks, the Burj club which has a gym, spa, and rooftop, and a luxurious lounge with panoramic views on its 154 and 155th floors.

When a city offers duty-free shopping, you know that their shopping experience would be parallel to none. Such an experience can be had at the Dubai Mall where you could enjoy shopping at luxury shops, stalls, and outlets. During the months of Jan and Feb, you could plan to go to the shopping festival and the Dubai Summer Surprises Festival in July and August. If however, shopping is not what you would deem as an exciting way to enjoy a holiday, you could also go ice-skating, or visit the aquarium.

For a taste of the Old Dubai, do yourself a favor and visit Bastakia. Built by wealthy merchants in the 19th century, Bastakia is also known as the Al-Fahidi neighborhood. Along its narrow streets are coral and limestone buildings topped with wind-towers which have been impeccably preserved. The Arabian architecture tells of a much slower age in Dubai’s history, making it the perfect place to visit amidst the newer architectural contrasts of the city.

Held in the Al-Fahidi Fort, you will find the Dubai Museum which was built in the year 1787 to defend Dubai Creek. In a similar fashion to Bastakia, it is built in traditional coral and lime blocks. The ceiling is made from palm fronds, mud, and plaster while the upper floor is supported by wooden poles. At the entrance, you will be blown away by a fascinating exhibition of old maps of the Emirates and Dubai, showing the gigantic expansion that hit the region after the oil boom. In its courtyard, you will also find traditional boats and a palm-leaf house with an Emirati wind-tower.

15.8 million tourists visited Dubai in 2017 alone, breaking records and improving notably from the year before. Like فنادق القاهرة in Egypt, you can make pleasant stay in Dubai five star luxury hotels at best price. It is no secret that Dubai has something worth seeing and experiencing be it from a modern metropolitan palette to a more historical preference – a trip here will definitely be worth it.