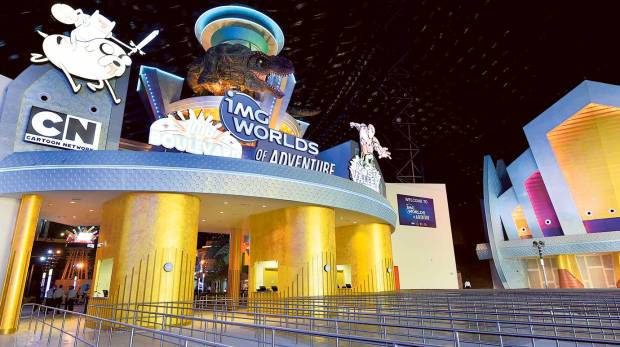 As you know, Dubai has the tallest building in the world, the largest shopping mall in the world, many man made islands, even a hotel with a rainforest. Dubai has now got another milestone - IMG Worlds of Adventure produced by The Ilyas & Mustafa Galadari Group (IMG Group). IMG World has already been billed as ‘World’s largest Indoor theme park’ and ‘Dubai’s 1st mega theme park’.

It is open and all set for an epic guest experience. Park consists of four zones. Two out of the four zones are global brands - Cartoon Network and MARVEL, while IMG Boulevard and the Lost Valley – Dinosaur Adventure zones are based on ideas of IMG group.

IMG Theme Park was completed few months before some more theme parks are set to open near Jebel Ali, where Dubai Parks and Resorts has Legoland, Motiongate, and Bollywood Parks. They are expected to open in end October 2016. All thrill-lovers, be ready to visit this adventures destination, which has 22 rides and attractions. Rides feature a velociraptor roller coaster, popular characters from CN, Super Heroes from MARVEL, hair-raising dinosaurs.

“Constructing the world’s largest indoor theme park comes with a degree of complexity. Something like this has never been constructed in this market," said Lennard Otto, the Chief Executive of IMG Worlds of Adventure.

The infrastructure of the theme park has covered it’s ceiling in sound proof black arches to wrap the huge noise created by the rides and the screaming riders, and also it’s nearly 140,000 square meters in area, a circular format means the park isn’t laboriously large. On a specific note, camera oriented things are not allowed, if anybody tries to capture picture/selfie during a ride, the ride will stop automatically.

There are numerous places to stop and rest, to shop for food and visit retail outlets. It takes 6-8 hours to cover 60% of the park, which, says Otto, is what most people can manage in one go. Don’t forget to bring some woolens because the park is chilly!